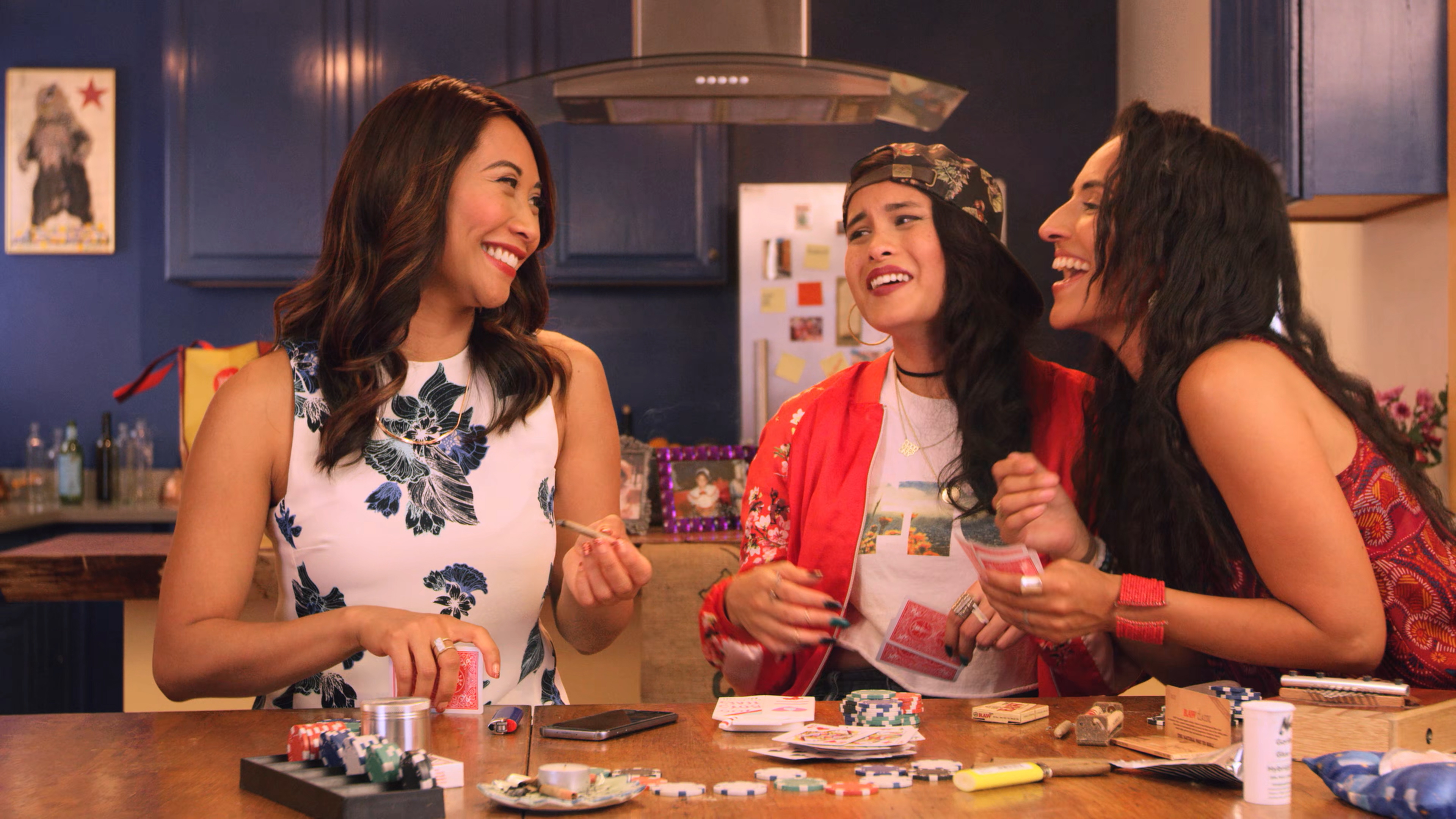 Over the last few years, the entertainment industry has finally shown more love, acceptance and a need for diversity across the big screen with blockbuster hits such as Black Panther and Crazy Rich Asians bringing out communities that have been largely marginalized and ignored. Plenty of the same can be said about the current cannabis industry and who’s being represented and put into positions of power. With this journey in progress comes the great need for storytelling to reveal worlds that many may take for granted or overlook.

This month the independent comedy series pilot, Good Vibes, premieres at The 42nd Asian American Film Festival in New York.  Good Vibes explores the lives of Filipino American female friends who all have a common love for cannabis and their hometown of The San Francisco Bay Area.

I sat down with Nicole Maxali, creator, executive producer and co-director of independent comedy series, Good Vibes, to discuss her entry into entertainment and what she wants the masses to know about cannabis culture and the Asian American community.

Talk to us about your calling into entertainment, particularly comedy?

I started my journey as an actor and writer at the only Filipino American theater in the nation, Bindlestiff Studio in San Francisco.  At Bindlestiff Studio, I was able to take workshops in directing, production, acting, stand-up comedy, and writing.  Kevin Camia, one of the SF stand-up comic legends and my very first comedy teacher, encouraged me to start going to open mics in 2007.   While honing my craft in San Francisco, I got to open for comics like Jo Koy and Hasan Minaj. One of my comedy career highlights was getting to open for comedy legend, Dave Chappelle at the San Francisco Punchline. It was hella special because my father was in the audience and it was Father’s Day!

What was your first experience with cannabis and what is your current relationship with the plant?

As a creative and performer, I utilized cannabis to help me with my social and performance anxiety. When I was doing stand-up comedy, I used it during my joke writing process.   My father had used cannabis off and on since my childhood for his chronic back pain, so cannabis use wasn’t stigmatized in my family like most Asian Americans. My dad was more relaxed about its use and there were times we’d even share a joint together before my nights out hitting up the open mic scene in San Francisco. Those are some of my fondest adult memories with my dad: us sharing a jay and him pushing me to keep writing and “being a voice of my generation”.

Currently, my consumption and relationship with cannabis has vastly matured since my stand-up comedy days.  I barely use THC products in my everyday life. I tend to reserve that for recreational use in California when I’m out at large scale events and experiencing social anxiety.  I do still use CBD topicals for my chronic neck pain or PMS cramps and I use CBD edibles or tinctures to help reduce anxiety, stress and sleeplessness. But since I am constantly working and hustling in New York or abroad, I like to be 100% clear in my productivity and interactions with clients or fans.

Why did you set out to create “Good Vibes”?

Not only was I inspired by the leaders and activists within the cannabis communities who push for equality and destigmatization,  I was also inspired to write an Asian American female driven cannabis series because I feel that representation matters. While I credit how “Crazy Rich Asians” proved to Hollywood executives that Asian American stories are worth telling, not all Asians are wealthy or the model minority stereotype that exists in our communities. Filipino Americans from The SF Bay Area especially bring a different kind of flavor to the mix. One that is often not shown in mainstream media.

With the success of “Crazy Rich Asians”, do you feel this now presents further opportunities in Hollywood for Asian actors?

Asian Americans have been creating films in America for awhile now. I remember going to Serramonte Theaters to see Dante Basco in “The Debut” almost twenty years ago; and the Asian American International Film Festival in New York is in its 42nd year!  That’s at least 42 years of our stories being told; however it’s only in the last 5 years we’ve seen Hollywood shift towards more success for Asian American casting and stories.

Always Be My Maybe by fellow San Franciscan, Ali Wong, is another example of how opportunities are rising for Asian American actors, writers and directors.  But again, there are still so many different Asian stories that haven’t been told. “Asian” isn’t just one ethnic group or cultural community. I think sometimes we forget it’s an umbrella term. So my story as a third generation Filipino American growing up in San Francisco is going to be vastly different from say a Taiwanese American growing up in rural America.  Each of our stories are different and gets a chance to be told… and hopefully not whitewashed by Hollywood.

Coming from San Francisco, what’s the cannabis culture like there?

Before I moved to New York seven years ago, San Francisco had the biggest and best medical marijuana scene in the United States.  The Bay Area has always been progressive when it comes to cannabis. It was culturally embraced and the SFPD wasn’t weaponizing the use of cannabis as much as other big cities in America. There were no “stop and frisk” laws in the Bay Area.  It was also a magical time when culture, community and the art scene in San Francisco was flourishing. Now it’s almost completely different. Tech companies and gentrification have changed the scene. You can order adult use cannabis on your phone and have it delivered to you. In my opinion, the convenience is there but the connection to community and culture is lacking.

Yet, now more and more women are leading the cannabis Bay Area scene and staking their claim in a previously male dominated industry. That’s how amazing this plant and the Bay Area are.  My friend and cannabis activist, Nina Parks, is one of many women of color fighting for social equity in the emergent cannabis industry. She also helped to shape “Cannabis Equity Programs” in San Francisco. It’s women like Nina that are currently shaping the SF cannabis scene and I’m all for it!

What do you want the masses to know or understand about cannabis culture and the Asian American community?

I align with MARY’s mission statement of changing negative impressions of cannabis users and cultivating community and togetherness. Changing people’s perception of what REAL cannabis users are like is important to me.  There are many cannabis users like myself that are successful professionals and positive contributions to society. The stereotypes that all cannabis users are potheads, dumb, criminals or losers is trite.

I think most Asian communities have been conditioned to think cannabis is a “gateway drug” and only negatively impacts people.  My grandmother definitely felt that way and so do other members of my family. But in my opinion, cannabis is definitely a healing plant and a tool for connecting to others and self.  Whenever I’ve shared it with others, there is this sense of connection or community that you don’t otherwise feel. In my experience with the plant, egos tend to lower and inner walls come down which allows you to connect with others with more openness and respect.

You never hear about a group of folks that smoked a blunt and then got into a brawl… that’s because we would rather just chill and have a really deep conversation about the existence of aliens or something.  As my father would say, “cannabis is all about good vibes, maaaaaan!” And that’s the intention I wanted to create with this series, to show THAT kind of cannabis culture, community, connection and good vibes… before the cannabis plant goes completely legal and corporatized.

Where does the series go from here?

What I am premiering at The 42nd Asian American International Film Festival is just the pilot of the “Good Vibes” series.  I hope the series gets investors that will allow us to go into production in the SF Bay Area and then acquire distribution on a streaming service like Netflix, Hulu or cable network like HBO.

Focusing on the present moment, I’m truly grateful for the opportunity to premiere my pilot in New York.  As I mentioned before, REPRESENTATION MATTERS! Whether it’s American media or the cannabis industry, women of color in both spaces get to have their stories told and take up space.  So having this series supported by my team of producers, cast, director and crew and then officially selected by The Asian American International Film Festival is a huge deal! It means so much to me that the world is finally ready to see our stories.