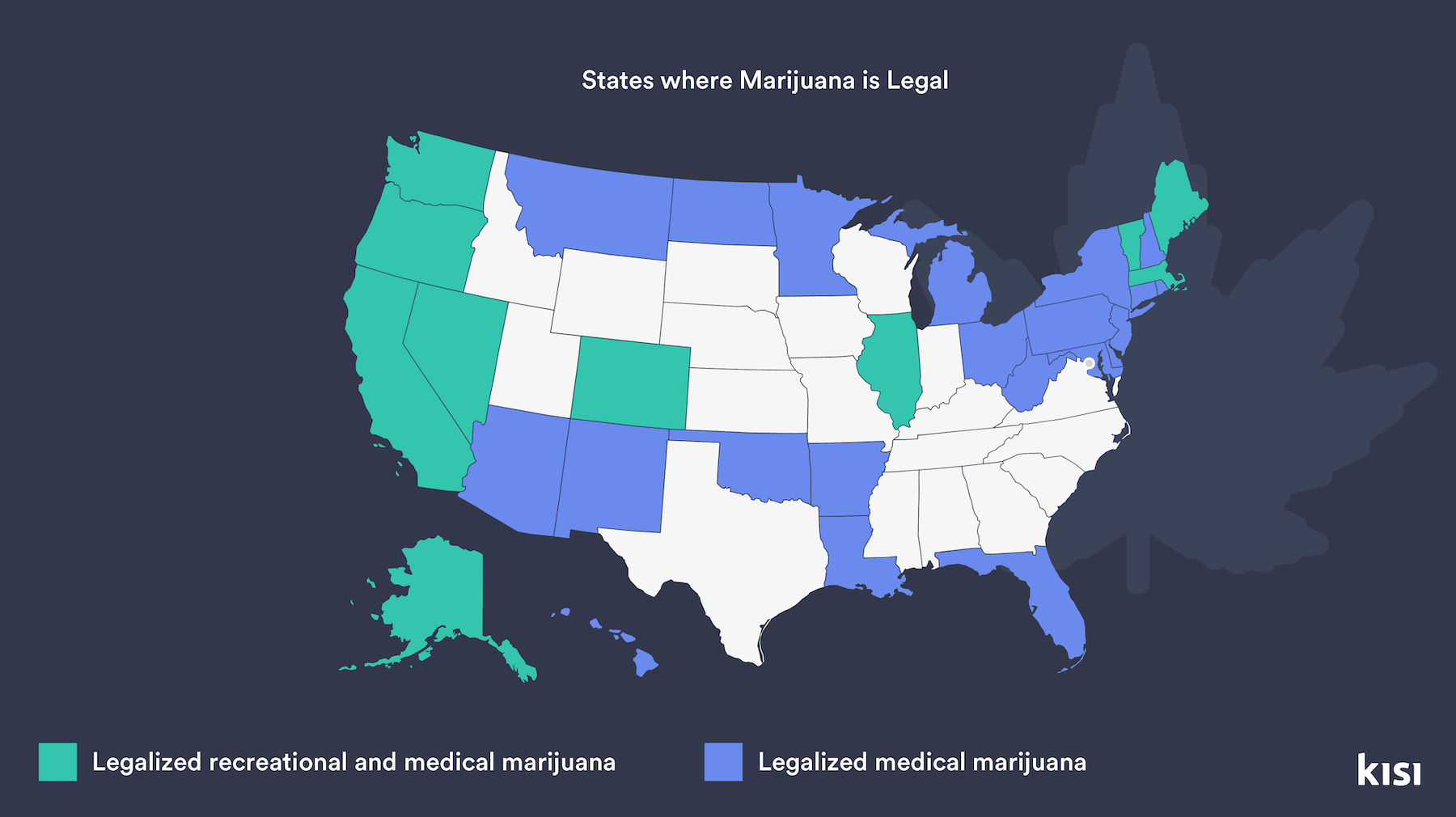 The legality of cannabis and its effect on the American population has been one of the most highly contested political topics in recent years. Some companies have capitalized on this growing industry, with GW Pharmaceuticals, Aphria, and NuLeaf Naturals listed as some of the fastest-growing cannabis businesses in the sector’s slow but steady journey towards legalization. These companies employ more than 120,000 people nationwide as the number of dispensaries and cultivation farms continue to grow. To better understand where the market is headed and what the business opportunities in the cannabis industry represent, Kisi conducted a study that dives further into the available data. Some of the major insights and statistics gained from the study include:

Since the first legal recreational marijuana sales began in Colorado in 2012, the cannabis industry has steadily gained momentum across the US. Since then, the number of licenses in the state for people who grow recreational cannabis has grown more than 400%. However, medical marijuana growing licenses grew at just 5% percent during the same time period. Some industry experts think this contrast in growth might be skewed by the fact that many cannabis retailers also have medical licenses within their operations, allowing them to service both audiences.

In 2016, the recreational cannabis industry continued to flourish, with North American users spending more than $6.7 billion on legal cannabis products, demonstrating a rise of almost 35% from the previous year. At the time, cannabis was only legal in Washington and Colorado, which is where most of these sales took place. At the end of 2016, Arkansas, Florida, and North Dakota legalized medical marijuana use, and four other states legalized it for recreational use. Even now other states have begun to decriminalize cannabis, allowing access to CBD oils (cannabis product without psychoactive properties), or have made strides to legalize marijuana.

Currently, in the United States, the following states have legalized the recreational use of marijuana:

The following states have legalized the use of medical marijuana:

Besides California, the two states that are expected to generate at least $1 billion in revenue from the cannabis industry alone are Colorado and Washington, which respectively have 572 and 448 total dispensaries in each state. These two states have 113.7 and 66.6 dispensaries for every one million people respectively. Other states have a limited amount of dispensaries, despite recreational or medical marijuana being legalized in recent years. West Virginia (0), Utah (0) and Missouri (0.2) have non-existent or almost non-existent levels of dispensaries per capita in those states.

Even though cannabis is legal in individual states, it is still illegal according to federal law, meaning banks are not legally allowed to accept money from cannabis-associated businesses. This makes it impossible for cannabis dispensaries and farms to build up legitimate businesses or receive various protections and insurance that traditional businesses are afforded by the government. Therefore, the expected $7.3 billion that will be spent on recreational marijuana will all be generated from cash-only transactions, leaving most cannabis businesses in a thriving but dangerous position in terms of liability and security. This is why many dispensaries and grow facilities are turning to advanced security technologies to deter theft and other criminal activity. An increasing number of grow facilities and cannabis processing plants have implemented cloud-based access control to secure their valuable storage.

Despite some of the obstacles to operating on a large scale, many cannabis companies are taking advantage of the “Instagram effect”. Currently, Facebook and most national publications and social media sites will not accept cannabis-related ads, however, Instagram doesn’t have as strict regulations. Many cannabis companies have started to take advantage of the photo-sharing app to promote their content, making it one of the industry’s most effective marketing tools. This is how cannabis-based companies still manage to publicize to states with very few dispensaries per state like Illinois (14), Rhode Island (3), and New Jersey (6).

Because of the banking struggles that many cannabis companies face, some of them are having trouble producing any sustainable growth. Even if a cannabis company does find a bank that is willing to work with them, it is not uncommon for the banks to cease business relations without warning. Most financial institutions, like Visa, MasterCard, or major American banks, are afraid to work with anyone associated with the cannabis industry.

Many of these problems could be resolved if cannabis became legal at the federal level. According to research, if cannabis use was taxed at 15%, more than $46 billion could be generated. That’s money that could be used by the federal and state governments to fund infrastructure projects, education, and healthcare costs. While currently, there are more than 121,000 full-time US workers employed by the cannabis industry, that number could increase to one million by 2025 if marijuana became legal in all 50 states.

The future of the cannabis market isn’t just limited to the United States borders. According to a new report by Grand View Research, the global legal marijuana market should reach $66.3 million in the next five years. While CBD is already legal in Europe, with a $416 million a year market, recreational cannabis use is still largely illegal. Luxembourg, a small country with a population of 600,000, recently announced they would be the first country in Europe to legalize cannabis. Germany, Italy, the Netherlands, Portugal, and the U.K. have all recently legalized medical marijuana products, with France and Spain making strides to legalize its use as well.

We should start to see recreational marijuana use become more widespread in Asia as well. Thailand became the first Asian country early in 2019 to legalize medical marijuana and was closely followed by South Korea. Japan has also passed legalization that allows for trials for a cannabis compound. Thanks to Thailand’s first step to revolutionizing the Asian cannabis market, Cambodia and Laos have started to consider legal use of cannabis as well.

Back in U.S. territory, sentiment towards cannabis use is radically changing. In 1969, just 12% of the population thought cannabis should be legal. Now, 62% of Americans firmly believe that marijuana should be legalized, which is double what it was in 2000.

After extensive research into the industry and the advanced technology services that dispensaries need, Kisi thinks the future of the cannabis industry is positive, with more states legalizing the recreational or medical use of cannabis each year. However, the journey to federally legalized marijuana has proven to be a long journey, although it has experienced a steady rise in public support. There are still some states that are vehemently opposed to recreational cannabis use, with many vocal politicians and community groups leading the charge. But, as more dispensaries are added per state, we can assume that the cannabis industry will become a driving force in the national economy, helping to create tens of thousands of jobs. Once marijuana is fully legalized, it will have the power to change our economy as well as our culture.